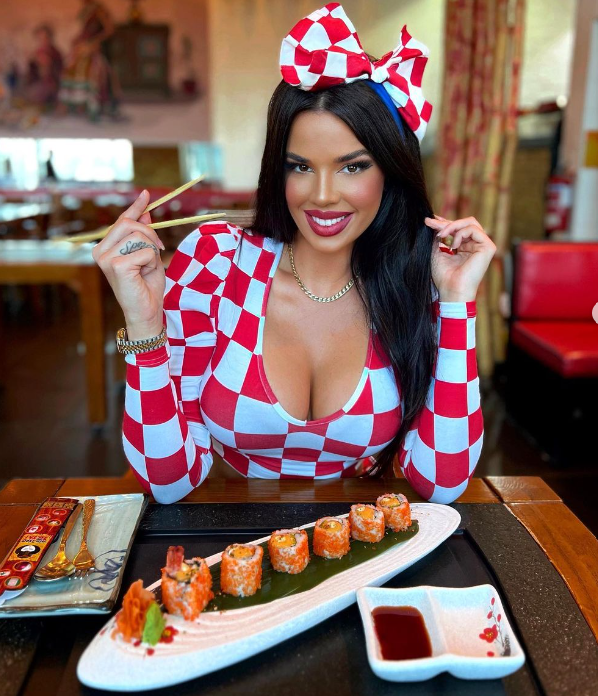 Croatian model Ivana Knoll teased Japanese fans with a video of herself eating sushi after Croatia’s win against Japan at the World Cup in Qatar on Monday.

Knoll, 30, had earlier in the day taunted Japan’s national football team, known as the Samurai Blue, with an Instagram post containing pictures of herself in front of the same sushi rolls before their match.“Japan, we are ready for you,” the German-born Croatian wrote in the post’s caption with a sushi emoji.Croatia will advance to the quarterfinals after a dramatic 3-1 penalty shootout during its game against Japan at the Al Janoub Stadium in Al Wakrah, Qatar. Both teams tied 1-1 in the 60-minute run and were given an extra 30 minutes of overtime. The game was eventually pushed to a penalty shootout after Japan and Croatia failed to make a goal during the overtime.Following Croatia’s high-stakes win, Knoll took to her Instagram again to post the video of herself eating the sushi rolls, writing in the caption, “Only sushi is on today’s menu.”

More from NextShark: Asians on TikTok are sharing relatable moments that left them too stunned to speak Replying to her post, one Japanese Instagram user congratulated Knoll’s team for winning the game. Meanwhile, another Instagram user asked the model if she only posted the video because Croatia beat Japan.

“I am your fan in Japan! Thanks for the great match,” a Japanese Instagram user wrote. “I support the Croatia national team.”“Still Japan literally showed what Asian football is kudos to them,” one Instagram user commented.