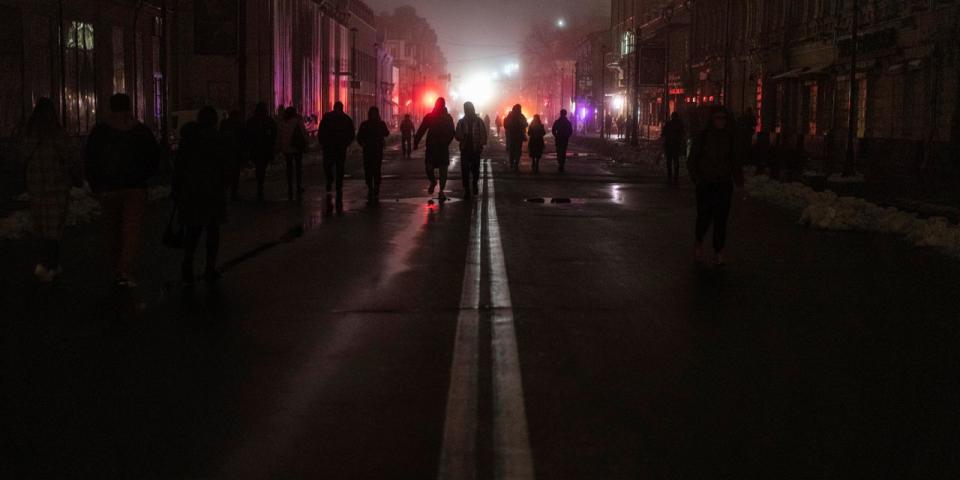 European officials are scrambling to help Ukraine stay warm and keep functioning through the bitter winter months, pledging Friday to send more support that will mitigate the Russian military’s efforts to turn off the heat and lights.Nine months after Russia invaded its neighbor, the Kremlin’s forces have zeroed in on Ukraine’s power grid and other critical civilian infrastructure in a bid to tighten the screws on Kyiv. Officials estimate that around 50% of Ukraine’s energy facilities have been damaged in the recent strikes.France is sending 100 high-powered generators to Ukraine to help people get through the coming months, French Foreign Minister Catherine Colonna said Friday. She said Russia is “weaponizing” winter and plunging Ukraine’s civilian population into hardship.British Foreign Secretary James Cleverly, arriving Friday on a visit to Kyiv, said a promised air-defense package, which Britain valued at 50 million pounds ($60 million), would help Ukraine defend itself against Russia’s bombardments.“Words are not enough. Words won’t keep the lights on this winter. Words won’t defend against Russian missiles,” Cleverly said in a tweet about the military aid.The package also includes 24 ambulances and 11 other emergency vehicles, some of them armored. “As winter sets in, Russia is continuing to try and break Ukrainian resolve through its brutal attacks on civilians, hospitals and energy infrastructure,” Cleverly said.Russian officials have claimed they are hitting legitimate targets. But the U.N. High Commissioner for Human Rights on Friday expressed his shock at the depth of civilian suffering caused by the bombing, amid broader allegations of abuses.“Millions are being plunged into extreme hardship and appalling conditions of life by these strikes,” Volker Türk said in a statement Friday. “Taken as a whole, this raises serious problems under international humanitarian law, which requires a concrete and direct military advantage for each object attacked.”The U.N. humanitarian office also chimed in with its concerns. “Ukraine is turning increasingly cold without power, without steady water supply and without heating,” Jens Laerke, a spokesman for the office, said Friday.He said the global body and its partners were sending hundreds of generators to Ukraine to help the government there in its efforts to keep people warm and maintain essential services, such as health care. The World Health Organization said it is sending generators to hospitals.

Investing Insights with Global Context Understand how today’s global business practices, market dynamics, economic policies and more impact you with real-time news and analysis from MarketWatch.Cleverly’s visit came a day after European officials launched a scheme called “Generators of Hope,” which calls on more than 200 cities across the continent to donate power generators and electricity transformers.The generators are intended to help provide power to hospitals, schools and water pumping stations, among other infrastructure.Generators may provide only a tiny amount of the energy that Ukraine will need during the cold and dark winter months.But the comfort and relief they provide is already evident, as winter begins in earnest and power outages occur regularly. The whine and rumble of generators is becoming commonplace, allowing stores that have them to stay open and Ukraine’s ubiquitous coffee shops to keep serving hot drinks that maintain a semblance of normality.Despite strong wind, rain, sub-zero temperatures at night, icing and broken power lines, more than 70% of Ukraine’s electricity requirements were being met on Friday morning, the country’s state power grid operator Ukrenergo said in a statement.The electricity supply has been at least partially restored in all regions of Ukraine, and the country’s energy grid was once again connected to that of the European Union, Ukrenergo CEO Volodymyr Kudrytskyi said on Friday.Kudrytskyi added that, despite that progress, about half of Ukrainian residents continue to experience disruption. He said all three of Ukraine’s nuclear plants located in areas controlled by Kyiv have resumed operation.“In one to two days, nuclear power plants will reach their normal scheduled capacity, and we expect that it will be possible to transfer our consumers to a planned shutdown (regime) instead of emergency (blackouts),” Kudrytskyi said on Ukrainian TV.Ukrainian authorities are opening thousands of so-called “points of invincibility” — heated and powered spaces offering hot meals, electricity and internet connections. Ukrainian President Zelenskyy said late Thursday that almost 4,400 such spaces have opened across most of the country.

He scoffed at Moscow’s attempts to intimidate Ukrainian civilians, saying that was the Russian military’s only option after a string of battlefield setbacks. “Either energy terror, or artillery terror, or missile terror — that’s all that Russia has dwindled to under its current leaders,” Zelenskyy said.Elsewhere, Ukrainian officials and energy workers continued their push to restore supplies after a nationwide barrage Wednesday left tens of millions without power and water.Kyiv’s mayor Vitali Klitschko said Friday morning that heating was back on in a third of the capital’s households, but that half of its population still lacked electricity.Writing on Telegram, Klitschko added that authorities hoped to provide all consumers in Kyiv with electricity for a period of three hours on Friday, following a pre-set schedule.As of Friday morning in Kharkiv, all residents of Ukraine’s second-largest city had had their electricity supplies restored, but more than 100,000 in the outlying region continued to see interruptions, the regional governor said.In the south, authorities in the city of Mykolayiv said that running water was set to start flowing again after supplies were cut off by Russian strikes on Thursday.