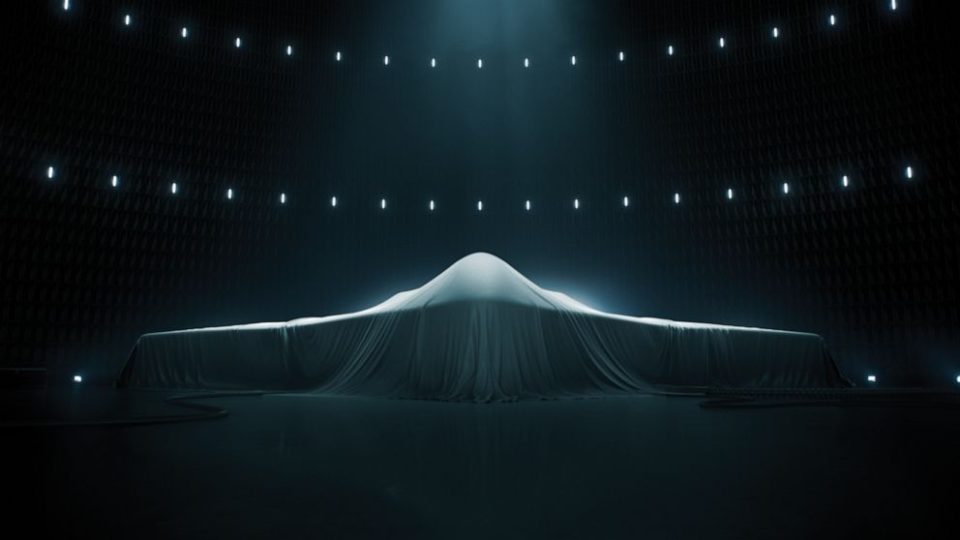 The big reveal for the new B-21 Raider stealth bomber finally took place Friday night in a glitzy unveiling worthy of a Hollywood production as the aircraft was rolled out of a California hangar, but every effort was made to ensure that details about the new aircraft will continue to remain shrouded in secrecy.Taking place under the cover of night, the plane emerged slowly from the hangar bathed in dramatic blue lighting that did not reveal much beyond the plane’s similar shape to the B-2 stealth bomber it is intended to replace.U.S. Defense Secretary Lloyd Austin was among the 600 VIP’s and 2,000 Northrop Grumman employees, who have worked on the new bomber for the past seven years, on hand for the big reveal at Northrop Grumman’s Plant 42 in Palmdale, California.

US Secretary of Defense Lloyd Austin speaks at the B-21 Raider unveiling ceremony at Northrop Grumman’s Air Force Plant 42 in Palmdale, California, December 2, 2022.“The B-21 looks imposing but what’s under the frame and the space age coatings is even more impressive,” Austin said in remarks after the bomber was unveiled. “Let’s talk about the B-21’s range. No other long range bomber can match its efficiency. It won’t need to be based in theater. It won’t need logistical support to hold any target at risk.””Fifty years of advances in low observable technology have gone into this aircraft,” said Austin. “And even the most sophisticated air defense systems will struggle to detect a B-21 in the sky.”The new long-range aircraft is designed to deliver both conventional and nuclear weapons while flying undetectable to advanced radars and air defense systems anywhere in the world.

Navy warships narrowly avoid colliding in San Diego Bay“America’s defense will always be rooted in deterring conflict,” said Austin. “So we are again making it plain to any potential foe the risk and the cost of aggression far outweigh any conceivable gains.”Over the last seven decades that the plane has been in development, scant details have been provided about the Air Force’s sixth-generation stealth bomber to ensure to avoid providing any hints of how it can remain undetectable to advanced radars.And it has literally been cloaked in secrecy.The first glimpse of what the new aircraft might look like came in the final seconds of a Northrop Grumman Super Bowl ad in 2015 that showed only the plane’s general wing-shaped contours because it was covered by a shroud.

Since then, Northrop Grumman has released only artist renderings of a wing-shaped aircraft in flight that looks a lot like the B-2 bomber that uses that shape and the materials and coatings on the plane’s fuselage to reduce its radar footprint. It’s assumed the new B-21 will improve on a 30-year-old technology.”The real differences are inside of the platform, because you can think about how much digital technology has progressed since the time we built the B-2 and the time we built the B-21,” Kathy Warden, Northrop Grumman’s president and chief executive officer told Breaking Defense in an interview ahead of the plane’s big reveal.The aircraft unveiled Friday will begin initial flight testing at Edwards AFB in California with its first flight forecast to take place in mid-2023. For now, there are six B-21 aircraft in various stages of production and the Air Force plans to acquire at least 100 of the new bombers, with the first one entering service in the mid-2020s.